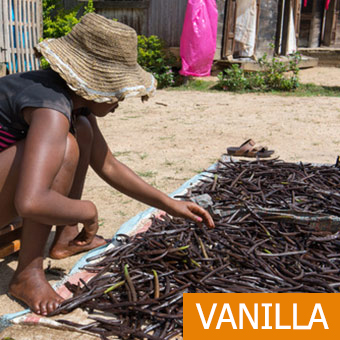 Madagascar vanilla is among the best. At first sight, vanilla from Madagascar is soft, fat and uniform in color (black / dark brown). Its taste and natural aroma seduce people all over the world. For our desserts, ice creams and drinks, this vanilla always brings a refined touch.

The origin of our vanilla ensures you a product from agriculture without chemicals.

Weight / Quantity : Not available this year

What you need to know about vanilla

Vanilla is a rather special spice. It comes from some orchids of tropical origin. It is used both in food preparations and in the perfume industry. It also serves as an effective medicine. Although it can be the fruit of different species of vanilla, the one from vanilla planifolia remains the most exploited and the most popular.

As the vanilla needs a hot and humid climate, the SAVA region is the first area conducive to its cultivation. It still requires a place imitating the environment of the undergrowth. Its stems and leaves should not be exposed directly to sunlight.This can lead to death of the plant. Malagasy producers are adopting a density of production in accordance with standards, generally limited to 5,000 plants per hectare. The cultivation takes place around October. After 2 years of growth, the vanilla trees are the subject of a floral induction. An essential operation for flowering and fruiting.

Vanilla is the fruit of vanilla. It comes in the form of a pod, similar to that of green beans. The mother plant is lianascent, so climbing. Native to the humid forests of Central America, its length can reach fifteen meters. Its woody stem has many adventitious roots, allowing it to cling to trees. Cultivated under better conditions, its shelf life can exceed 10 years. Of the different vanilla species, only Vanilla Planifolia and Vanilla Tahitensis are grown for commercial purposes. Their fruits can be harvested when they reach a weight between 10 g and 15 g. Harvesting is usually done eight months after flower pollination.

The original land of vanilla is actually in Mexico. In the territory of the Aztecs, it had already been used even before the Spanish conquistadors arrived on the scene. The famous pod arrived at the Spanish court in 1516, carried away by the conquistadors. Then followed his arrival in England, Germany, France and Reunion Island where we had tried to cultivate it. But a problem arose, no vanillier had given any pod. The plant needs a specific pollinator to be fertilized. It is a Mexican endemic bee called Melipone.In 1841, a young slave named Edmond Albius had been able to fertilize the flower manually. Since this discovery, vanilla has been cultivated and exploited outside of Mexico.

The benefits or the virtues of vanilla

Apart from its aroma, vanilla is also known for its therapeutic virtues. Oil or powder, it goes into the preparation of some care products.