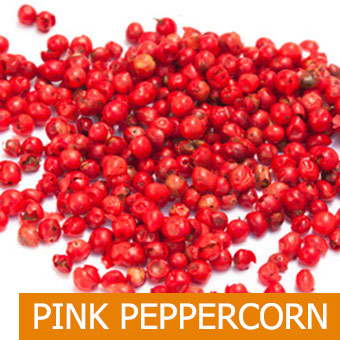 Discovered in Latin America, the pink peppercorn was introduced in Madagascar in the 19th century. The false pepper has a resinous aroma. Crushed or whole, it is good for your salmon rolls or chocolate cream. The pink peppercorn has antispasmodic, antiseptic and anti-inflammatory properties.

The origin of our berries guarantees you a product grown without chemicals.

We guarantee a pink peppercorn of impeccable quality, sorted by hand

Weight / Quantity : from 5kg to container

The Pink Peppercorn, what is it?

The pink berry or pink pepper is a spice from a small evergreen tree. A magnet for heat, it is grown in countries with a tropical climate. She is from South America. This fake pepper is among the flagship products of several countries such as Reunion and Madagascar. Used to enhance different dishes, it also has medicinal properties.

The cultivation of pink pepper in Madagascar

In Madagascar, the pink berry grows mainly in the regions of Itasy and Bongolava. In the west of the country, three villages provide the bulk of its production. We can mention Ambararatabe, Ankadinondry Sakay, Tsiroanomandidy. Wild, planting pink peppers does not require any chemical fertilizers. Pink Bay is a huge potential for the Big Island. Its cultivation is done by cuttings or by seed sowing. It should be noted that the flowering of this spice extends from February to April. Its harvest, meanwhile, is from December to January or from April to June. Until now, the operation of the Pink Bay sector of the Big Island is mainly for export.

Description of the pink berrie

The pink berrie still called Bourbon Bay is the fruit of the plant Schinusterebinthifolius. The latter is part of the family Anacardiaceae. A very resistant tree, it stands out for its rapid growth. It can reach 7 to 10 meters in height. Its leaves are aromatic and give off a peppery smell. Pink pepper is scarlet red. Round in shape, it is the size of a lens. Side flavor, it incorporates a sweet taste mixed with pepper and anise. Its scent is more or less spicy. This spice is mostly used to decorate appetizers (rolled salmon, etc.), flavor your chocolate cream and tea.

History of this fake pepper

Pink pepper comes from South America. He loves the heat, he has naturalized in many countries of the world. In the 18th century, the islands of the meeting were the first to experience its culture. What has also allowed to give it the name of "pepper Bourbon". Bourbon Island was the old name of Réunion. The pink bay then spread to South Africa, New Caledonia, Brazil, Madagascar and many more. Beyond a simple condiment for the kitchen, the pepper of the meeting is used as accessories of ornaments.

The benefits of the Pink Peppercorn