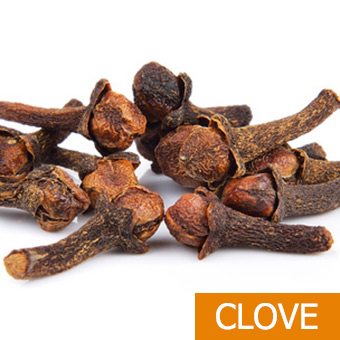 Because of its quality, the Big Island has become the second largest clove producer in the world. Aromatic, pungent, refreshing and with a warm taste, the clove is to be used in moderation to decorate your cakes, Chutney, duck breast, etc). It is also effective against bad breath, toothache and mental fatigue. It is also used in other sectors such as perfumery and cigarette manufacturing.

The origin of our cloves ensures a product from agriculture without chemicals.

Cloves are very spicy. To maintain its powerful aroma, it is harvested before it is mature and then dried. Indeed, this flower bud gradually loses its odor to bloom. From a persistent tree, clove, clove is prized to raise different dishes. It is also used for its antiseptic and anesthetic properties.

In Madagascar, cloves are planted for its two products, namely nail and petrol. More precisely, the first comes from the drying of the flower buds of the clove tree. The second is obtained by distillation of its leaves. Introduced into the Big Island in 1827, we now find clove cultivation in the provinces of Toamasina, Antsiranana and Fianarantsoa. But most of the production is concentrated in the region of Analanjirofo. Low altitude, rainy zone and where the temperature is around 26 ° C to 30 ° C, the east coast of Madagascar is conducive to the development of this plant. It is worth noting that Malagasy nails are exported to Indonesia and Northern countries. They are used in the composition of kretek cigarettes. Rich in eugenol, the essence, for its part, is intended for pharmaceutical and cosmetic purposes.

Description of this floral bud

The clove is a tree ornamental 8 to 20 m high. It belongs to the species Myrtaceae, of the same family as eucalyptus. It comes from the Maluku Islands in Indonesia and bears the botanical name Syzygiumaromaticum. This tropical plant is evergreen, hard and oval. From these leaves come the essential oils of cloves. These are known as an effective remedy for dental problems. They are also used to remove bad breath. The clove has maturing flowers with 4 petals of pinkish white color. The clove nail is the flower bud harvested before the flower blooms. After several days of drying in the sun, it has a dark brown hue ready to decorate your dishes.

The marketing of clove is already in many writings dating back to antiquity. An Indian medicine book of the time mentioned its virtue capable of purifying the breath. At that time, the Chinese used precisely to perfume their mouths during an appointment with the emperor. In the fourth century, Apicius devoted part of his work "De recoquinaria" to talk about the daily use of cloves. Traces of this spice were also found in the debris of a burning kitchen of a site in Mesopotamia. The Arabs were the first to haggle in the Mediterranean areas between the fourth and seventh century. From century to century, clove was gaining market value. In the seventeenth century, it was even more expensive than gold in Europe. In the 16th century, the Portuguese landed in the Maluku Islands and tried to monopolize the market. In the following century, the Dutch, through Pierre Poivre, brought back cloves in France. He then introduced seedlings to Mauritius, Guyana and Madagascar.

The virtues of cloves